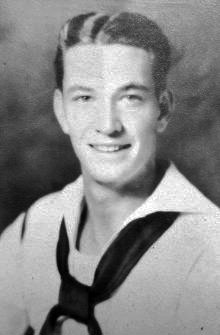 A man who left his home in north Missouri, to serve his country and died on December 7th, 1941, returns to his home town of Laclede today.

Seaman Second Class Harold Lloyd Head was a victim in the attack on Pearl Harbor, while serving on the USS Oklahoma.  The ship suffered multiple torpedo hits and capsized, killing 429 Sailors and Marines, including Head.

It took years to locate the crew’s remains and most were buried as “Unknown”, but in 2015 permission was received to exhume the graves for possible identification.

On September 26, 2017 a report was issued and Seaman Harold Loyd Head’s remains were identified.

Today, October 10th, what would be his 97th birthday, Seaman Harold Loyd Head’s remains return to his hometown under full formal procession which leaves Parkville at 10:30 am with the Patriot guards, Highway Patrol and other Veterans Organizations.  The procession and is expected to arrive in Laclede around 1:00pm.

The Chillicothe Fire Department and others will pay tribute as the procession passes down the road.

Laclede Mayor Larry Smith says it is an honor to be a part of laying Mr Head to rest.

Mayor Smith says the town is preparing for a large attendance of people.

The procession will leave Parkville at 10:30 this morning and they expect to arrive in Laclede at about 1:00 pm.  Seaman Harold Loyd Head will be laid to rest with full military honors conducted by the United States Navy.